DIFFICULT TO believe, but it really is 30 years since the idea of a film society in Lyme Regis was first mooted. It is, perhaps, even more incredible that LRFS has survived the ups and downs of the film industry, some financially difficult early years, and the closure of our beloved Regent cinema, to be still going strong over 300 films later.
The idea was Selima Hill’s, who became our first chairman; I came on board after a notice was read out in a Woodroffe school assembly, asking if anyone wanted to be involved! A committee/action group was formed (Jenny Rathmell and Doris Winter being two of the prime movers), a meeting was held with Peter Hoare, the owner of the Regent and a cinema man through and through, and the project was up and running – if enough people wanted to join. The membership target (roughly 70) was achieved and, with the participation of Phil Walkley and the BFFS, Good Morning Babylon was shown on 2 October 1988.
The early years proved to be a struggle, however, as building up the membership was not easy and the going was slow (and the range of films in the 1980s and early 1990s was not at its most edifying, I would suggest). Indeed, we needed coffee mornings and jumble sales to survive (the Regent’s manager, Alec Orme let us use the cinema’s foyer); the turning point was when we found a large sum of money – about £250 – in the pocket of a pair of trousers. We handed it in to the police, it was never claimed and so was eventually passed back to LRFS – and we never looked back!
It would be impossible here to thank and name individually all those, in addition to the above, who have supported us over the years, whether members, projectionists, front-of-house, Sue Case for her wonderful cakes, Kerri who makes them now . . .
However, with my booking officer hat on, I would like to thank Troy Film Agency (first dear Ken and his wife Jay; now Simon and Christine Troy, who have looked after our booking needs the entire 30 years) and the film companies themselves. One heard stories about ‘the big boys in London’ who ‘wouldn’t have the time to . . .’ but my own personal experience, both for LRFS and latterly when working for Scott cinemas, ever since my first nervous phone call in 1988 (to Warner Brothers, if memory serves!), is that they have always been friendly, courteous and helpful. And, let’s face it, without their support we would all be sitting here playing charades!
As for the most memorable moments – again, space precludes compiling a comprehensive list, but here is my short selection: Nellie Templeman playing the piano to Intolerance; the film breaking during Cinema Paradiso; the entire audience rooted to the spot after Once Were Warriors; members who were so affected by the grace and emotion of Departures they went off to buy the DVD for Christmas presents; confirmation – if it were needed – of the star-making tracking shot in Stagecoach; the phone call to a laboratory in France for an electronic key to unlock My Afternoons with Margueritte, ten minutes before it was due on screen!

We celebrated this moment with a very well attended showing of two treasures from the past on October 7th 2018, the nearest date we could contrive to our first ever showing in 1988. After some excellent refreshments we watched Buster Keaton's One Week and Jacques Tati in Jour de Fete - the recently restored colour version. True to the historic experience the "film" broke 5 minutes before the end of the Tati - actually a DVD which refused to play the last few minutes - so a slight disappointment, but a reminder of the full variety of the cinema experience! 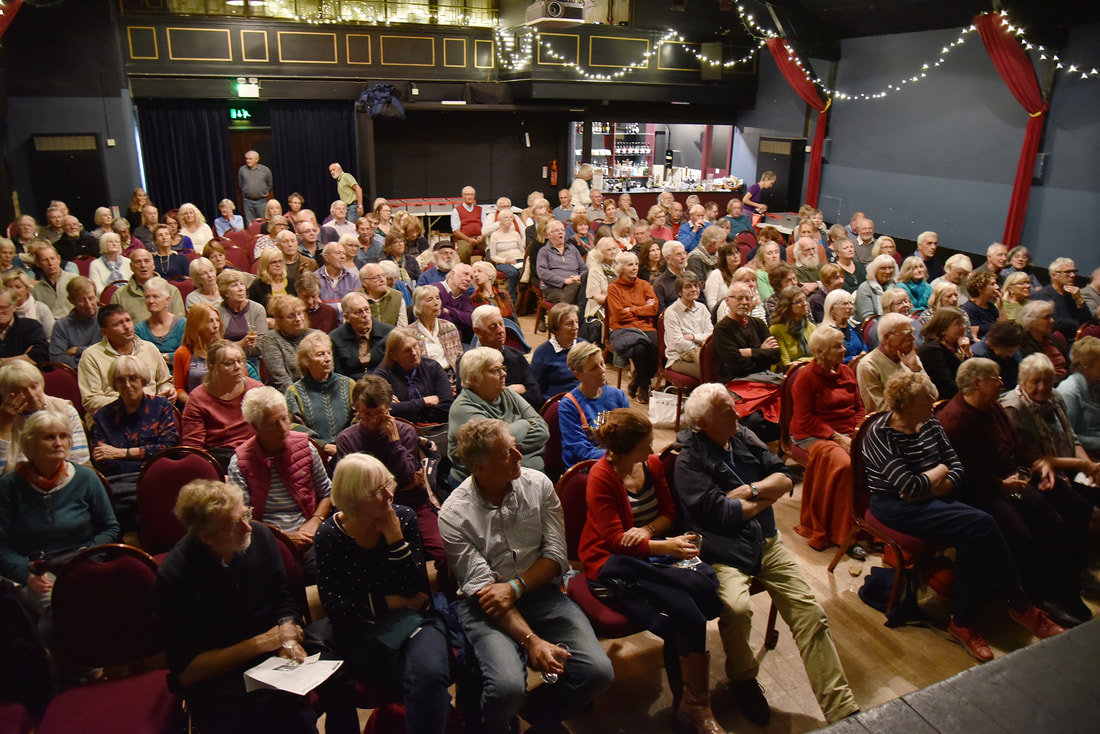 A near-full house at the Marine Theatre just before Buster Keaton came on screen.